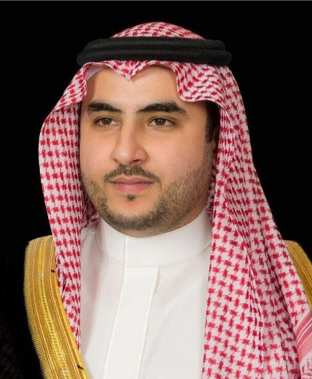 Prior to this, Prince Khalid served as Ambassador of the Kingdom of Saudi Arabia to the United States of America from April 2017 until February 2019. During this time, His Royal Highness helped usher in a new era of Saudi-U.S. relations, strengthening the existing ties between the two nations.

Before serving as Ambassador, Prince Khalid was an advisor in the Saudi Embassy in Washington, and at the Ministry of Defense in Riyadh. Earlier in his career, he was an F-15 pilot and tactical intelligence officer in the Royal Saudi Air Force (RSAF). ‎During his time at RSAF, Prince Khalid flew more than 50 combat missions as part of the international coalition‎campaign against Daesh (ISIS) in Syria, and as part of Operations Decisive Storm, and Renewal of Hope in Yemen.

Prince Khalid graduated from the King Faisal Air Academy in Riyadh, and was ‎commissioned as a second lieutenant in RSAF. He received his initial pilot ‎training at Randolph Air Force Base in San Antonio, Texas and advanced training at Columbus Air Force Base in Columbia, Mississippi. He also studied advanced electronic warfare in France.‎

His Royal Highness is married and has two children.